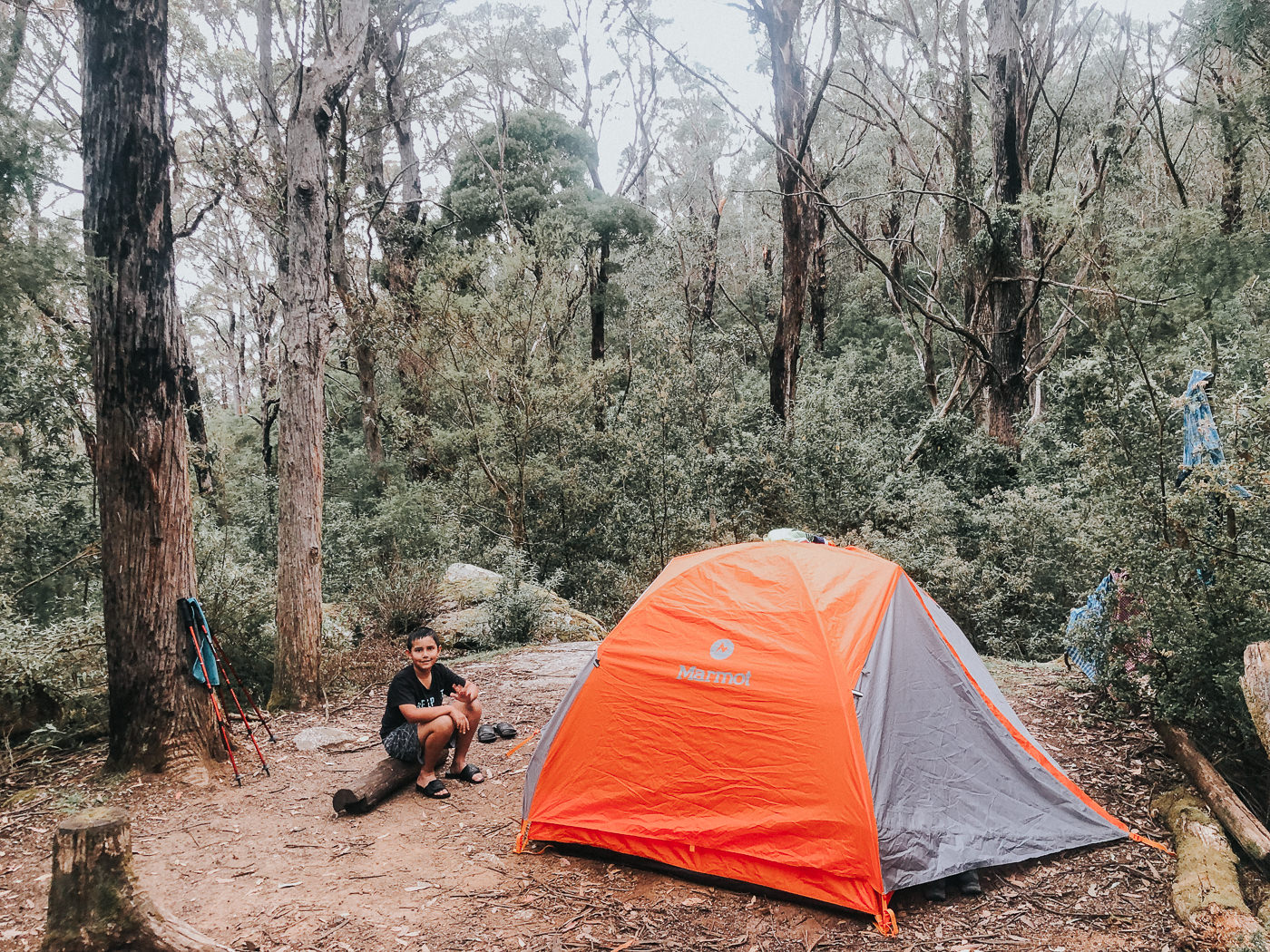 On the way to Roaring Meg

From the Lightstation, it’s another 2.5hr hike to our last campsite – Roaring Meg. We came to a junction which gave us two different options. One way was another 6.1km (through bushland) which would take 2hrs or choose the other direction which would be 7.2km (along a road) and would also take 2hrs. Wanting to walk a kilometre less, we took the path through the bush. Boy, were we regretting our decision once we hit the super steep hills! We should have guessed that there was a catch to taking this route! There was a long decline for a while so we were guessing what would be coming up next – the long uphill! The great thing was that we actually took half an hour less to arrive at our campsite than the 2 hours stated! It was worth the hill climb. Ethan was such a trooper, encouraging us with ‘we can do this!’ when Andreas and I started groaning. A true family adventure!

Arriving at Roaring Meg – our campsite

Arriving at Roaring Meg via the bush route, you cross over a little creek to the campsite. There were a few people there already and we were struggling to find a flat area of dirt where we could set our tent up. There were tree roots coming up everywhere and the creek was right next to the campsite which meant that there’d be plenty of mosquitos and creepy crawlies. This was definitely my least favourite campsite by far!

That was until I saw a guy walking down from the steep steps to collect some creek water. He informed us that there was room for more tents at the top of those steps. There were two camping areas at Roaring Meg and I was so happy to lug our stuff up to higher ground. That’s where we would have arrived if we had walked along the road to get there. There was a lovely spot for us to camp on, with tables for preparing and eating meals at. The toilet was also up there. Camping became fun again.

A social group of people were camping there as well. Little Ethan is such a social butterfly. He was really happy that they invited him to join in playing Uno. On the previous nights, we arrived a little later and there just wasn’t time to play card games. As soon as it got dark, we were in bed. Again, no annoying animals bothered us here in the middle of the night. We didn’t need any animals to keep us awake though. Andreas and I were so restless that night as the hills really worked our legs! We could not find a comfortable position to sleep in. Thank goodness this was the last night. We’d be back in our comfy beds the next day.

The last leg of our trip was the hike back up to Telegraph Saddle, where we started from. We quickly popped in to have a look at the Halfway Hut campsite, which really is a campsite for those when Roaring Meg is booked out! There’s an unused old hut, but that is it.

Up to Telegraph Junction is a fairly easy hike. When the incline begins, it started to get tough for our little one. His calves and feet were hurting so we had to take it slow, giving him plenty of breaks and massages. This little boy had done unbelievably well on the hike. 55km! He had greater stamina than I expected from him. On his earlier hike alone with his dad, he was far slower and nowhere as confident with his steps. With me being there, they walked at a faster pace.

Towards the end, we let Andreas plough ahead to the finish line. Ethan and I took our time. With lots of coaxing, singing and jokes – we made it to the top! What a relief to arrive back at the carpark! Some unfortunate people had just missed the bus which takes them down to Tidal River where most of them parked so they had to wait a while in the heat for the next one. We were glad we parked up there. (In high season the car park is closed and you can take a shuttle bus from Tidal River to Telegraph Saddle Carpark and return.)

Back in Tidal River – back to civilisation!

We drove down to Tidal River where we had a warm shower and enjoyed icy treats from the store before we headed home. Fishcreek Hotel was our first choice for our end of hike meal. Unfortunately we arrived a little lat for lunch and there were no more meals being served then. Pays to ring ahead to check if you do want to go there.

A stop at McDonalds was the next option. For most of the last part of our hike and during the super hot day, we were wishing for a frozen drink from McDonalds. It was nice to finally get one.