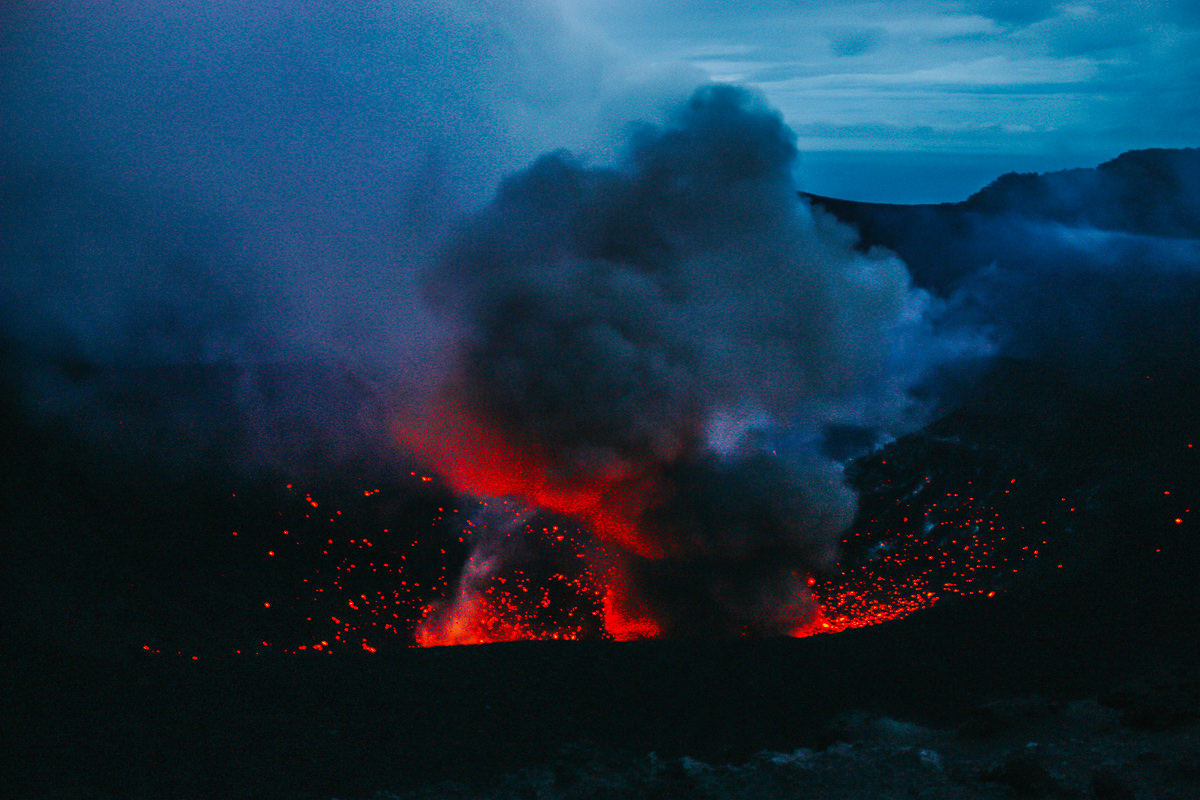 Last night, we attended the premiere of the IMAX movie Volcanoes 3D: The Fires of Creation, which you can watch in the IMAX Melbourne.
The movie brought back all our memories of our Vanuatu volcano adventure. More of that later.

This is an informative documentary of how the planet Earth was born of fire and how volcanoes have created the world we know. It’s also a tale of thrilling adventure, science and culture. The documentary follows intrepid explorer, Carsten Peter, as he travels the world to conduct some research on active volcanoes – including Mt Yasur in Vanuatu. This movie takes you right into the crater of the volcanoes, without you having to dodge boulders! A must see for all volcano lovers and adventurers who love to travel (and of course watch it with your kids to broaden their horizon).  Some amazing footage!

Go watch the movie and if you ever feel the need for an adrenaline rush. Or do yourself a favour and go see a live volcano (Keep in mind: it’s never safe).

Our photos here will not do the movie justice. These are just some holiday snaps form 2008.

The first time Andreas and I went on an overseas holiday together, approximately 11 years ago, we chose something quite adventurous – a trip to see a live volcano (Mt Yasur) on Tanna Island in Vanuatu. It just seemed like such an exciting thing to do as we are always looking for new experiences. Not once did it cross our minds that it could be quite hazardous up there. We really didn’t expect that we would be staring down into a crater full of simmering lava.

Our holiday started off tame enough, opting for a nice resort with a pool in Port Villa. We had a lovely room at a nice hotel and ate delicious meals in safe surroundings. The most dangerous thing we did was venturing out on a kayak! We lapped it up as we knew this was not what we would be getting once we hit Tanna Island. Getting there was via a light plane, landing at a very basic Tanna Island airport. From there, we were picked up by our hotel transport (which was the transport for all the hotel’s supplies) and were driven for two hours to our hotel.

Yes, we could have chosen a luxury resort on Tanna Island as well. The deciding factor was that we weren’t keen on the two-hour trip up from the luxury resort to the volcano, then back at night afterwards. We knew that we were travelling in trucks along bumpy dirt roads most of the way. There weren’t many options which were close to Mt Yasur so we chose the closest accommodation to it. It was a short forty-five-minute drive to Mt Yasur. Port Resolution Yacht Club was definitely not the five-star luxury hotel its name would lead you to believe, but it was close to our adventure destination.

Port Resolution Yacht Club goes down as the most basic accommodation which I’ve ever stayed in, apart from camping in a tent! The meals were home-cooked and delicious but there was only one main meal per day (dinner) with not much else to eat in between. Lunch consisted mainly of mangoes and bananas, which meant that we went hungry most of the day. Tanna Island was a rather remote place when we were there. There were no cafes, bars or supermarkets. This is 2008. They had all their supplies shipped or flown in from Port Vila. It was lights out at sunset and we shared our cold water shower with creepy crawlies. Luckily we thought ahead a grabbed a couple of bottles of spirits to sip on at night.

We spent our days just exploring the island until the weather cleared up enough for us to head up to Mt Yasur. Another Australian couple who were staying at the same hotel had been waiting for a week for the rain to clear up! When it rains into the crater of the volcano, toxic gases are emitted and acid rain is produced. That’s why tourists were not taken up when it rains. Thank goodness we brought some good weather with us and we could all head up to look into the crater of the volcano.

We were all warned about the dangers of being up so close to the crater, but I’m not sure we all really knew how crazy dangerous it was! With no hard helmets or proper protective gear, we were driven up Mt Yasur to what I would say is the most thrilling thing I have done to date. This was a live volcano which spits up lava! ‘Be careful of the hot boulders’ they told us. These large burning rocks are regularly hurled up into the air and could possibly hit one of us! Somehow you just didn’t think it could happen to you. Just like that poor young lady who was at the same spot last year and a lava rock landed on her arm, burning her down to her bone! Her boyfriend had taken her up there to propose to her. He ended up proposing to her in the hospital!

Mt Yasur did not disappoint. We looked into the crater to see the boiling lava. Lava was spat upward into the sky, creating an impressive firework-like display. One large lava rock landed on a ridge which we had stood on only minutes previously! Our hearts were pumping fast and the adrenaline was flowing through our veins. Not sure if we were aware of how crazy we were by just being up there. We got as close as we could to get some photos with all the action in the background! Keep in mind that this was way before we took up photography or blogging! The photos were taken on our Canon Ixus  and Canon 450D (set mainly on ‘P’ mode) and the styling of the photos was not thought about whatsoever. In other words: Holiday snaps! Can’t help but think of how amazing our photos would be if we went back up there now.

Watch the movie and you even might want to adventure to an active volcano.