Wowsers! Where do I start? It’s been one hell of a Melbourne Cup Carnival! After being away from it for three years, the return to Flemington was spectacular! The weather didn’t play nice (giving us the coldest Melbourne Cup Day since lord knows when!), but that did not dampen our fun times. The show carried on regardless.

It was a week of catch-ups and meeting new friends (who we have only corresponded with on social media). The fashion was a feast for the senses. Fashion was of a very high standard on each race day, culminating on Oaks Day at the finals of the Best Dressed and Best Suited competitions. The most popular accessory of the week was goosebumps! 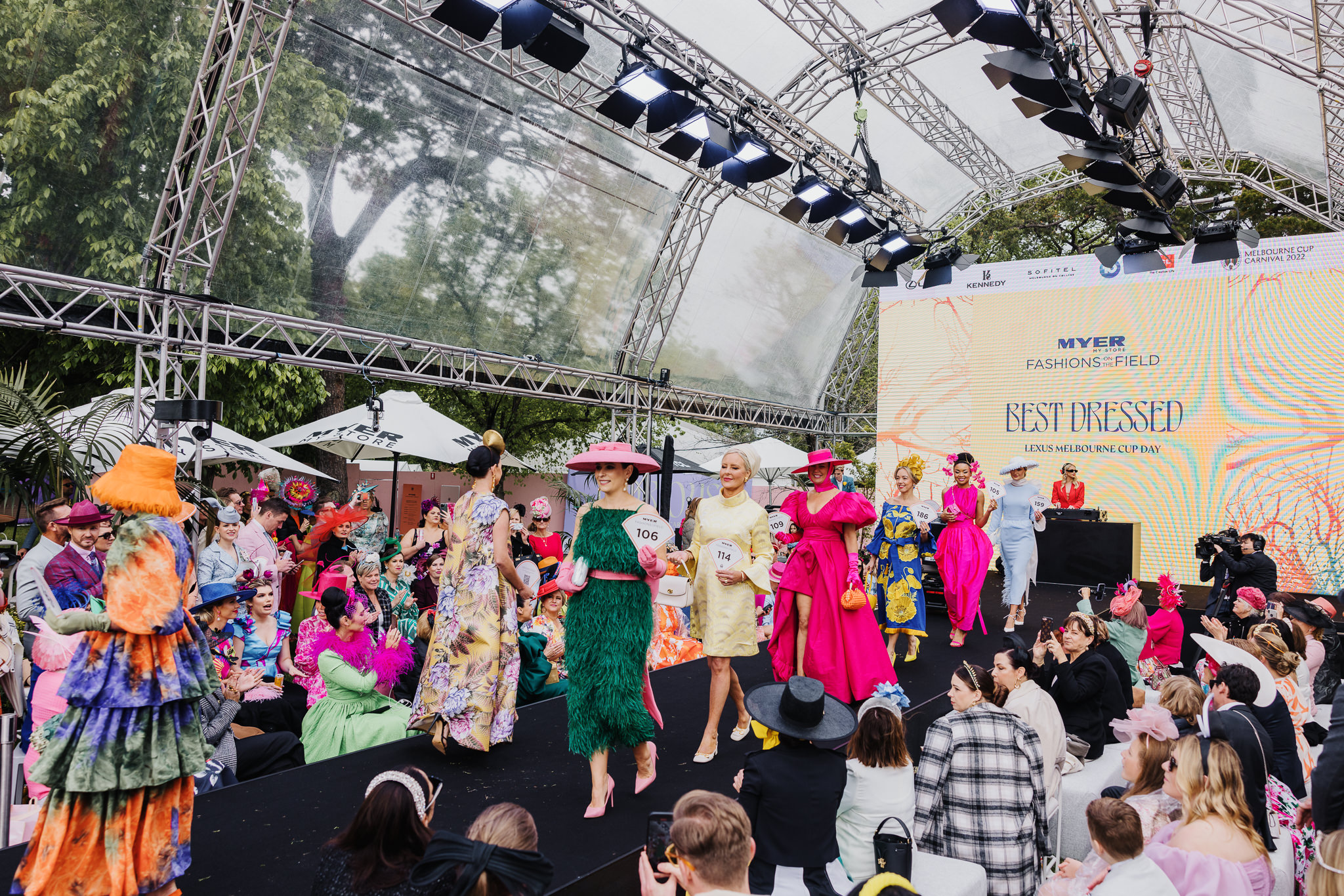 While there were no serious male contenders to be seen in the Best Dressed category, women suited up and gave the men some fierce competition. Runner-up in the Best Suited category went to gorgeous Gracyn, who donned a matador-inspired suit. Sherlon Garbo from Darwin took out the Best Suited title in his super stylish skirted suit. This is Sherlon’s second win in three years! What a clever young man, doing his homework to put together an on-point outfit for this competition. 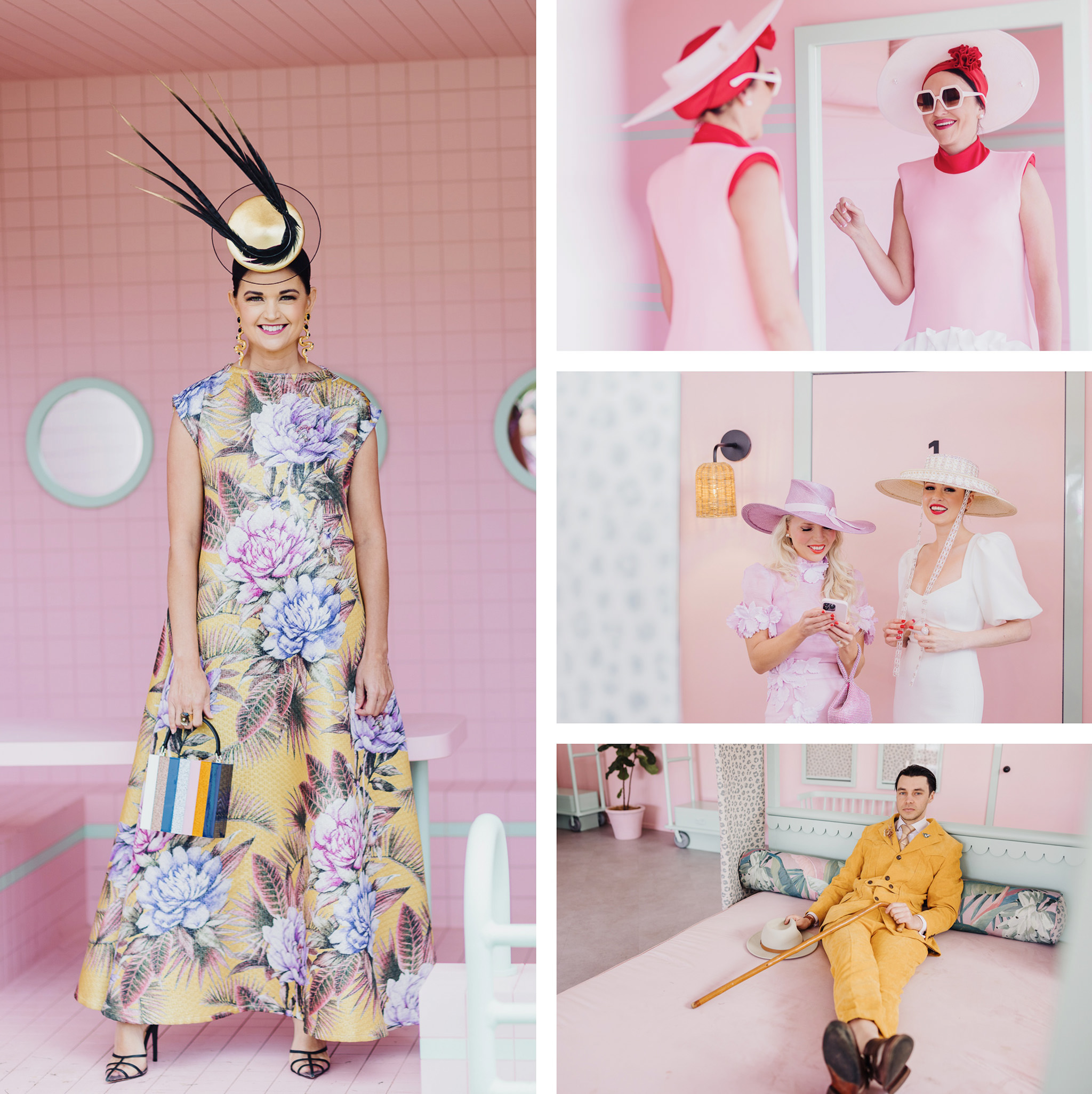 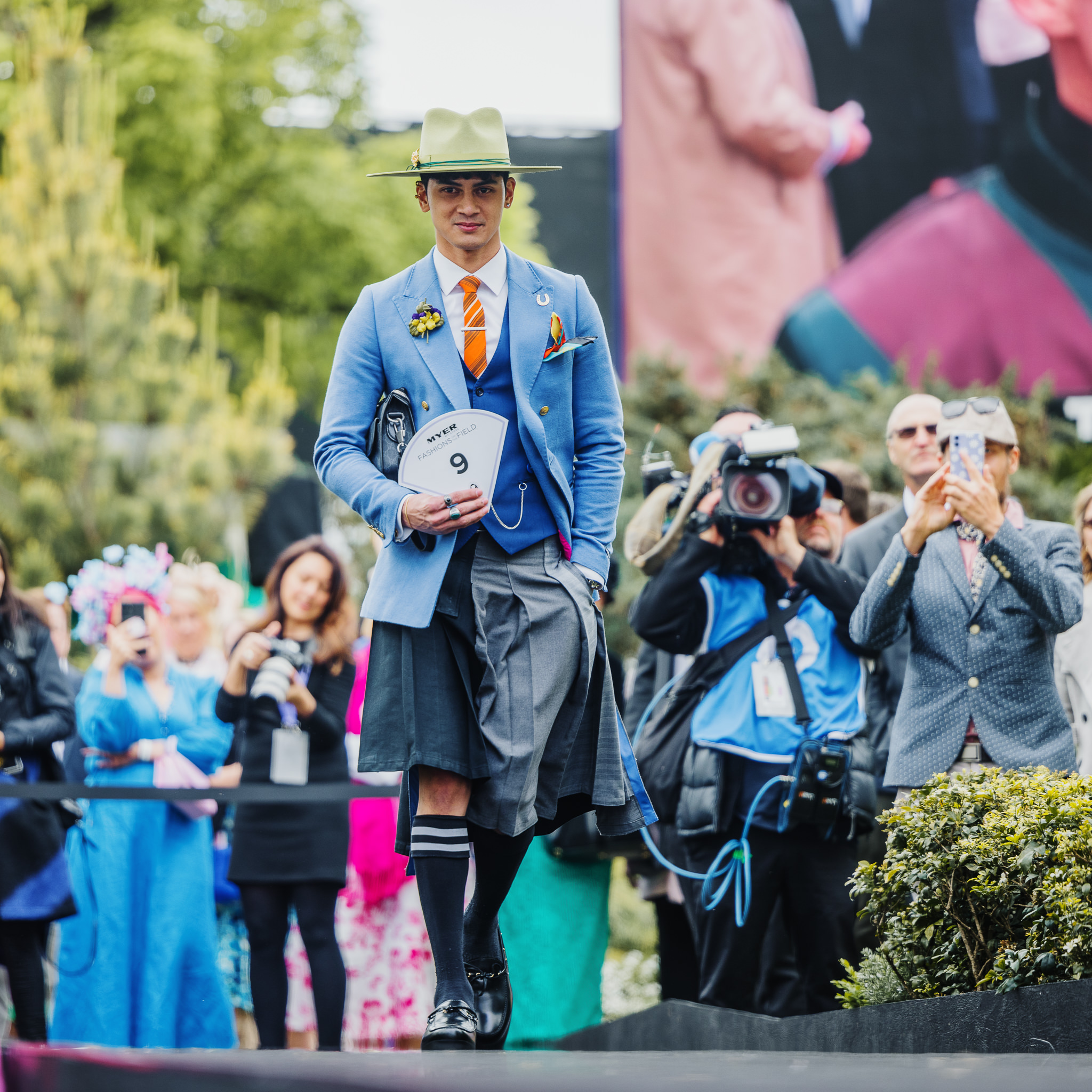 The week was a cold one! We all shivered at some point during each day! Derby Day was the warmest at 17 degrees, with Melbourne Cup Day going as low as 13 degrees. I can’t remember a colder Melbourne Cup Carnival. The weather on Melbourne Cup Day threw everything at us! We had freezing cold temperatures, it rained and it hailed! The sun did shine briefly. The number of attendance was lower than in pre-covid days. The cooler temperature most definitely turned a few racegoers off from attending.

The FOTF stage was set up on the far end of The Park precinct. This meant that we were on the opposite end of The Pony Bar & Motel, where we loved to hang out in previous years. It is only a short walk, but with so much happening at the stage throughout the day, it was hard to go back and forth to that area. It was a great photo spot, so we headed there early to get some great snaps! The photo booths on the lawn were very popular. The flooring got dirty very quickly due to the wet ground.

The TAB 360-degree photo booth was a lot of fun, and so was the Dyson photo activation for those who got their hair touched up by the Dyson team! The stage hosted many different musical talents who entertained the crowd. Dancing to the pumping tunes was one way to stay warm! 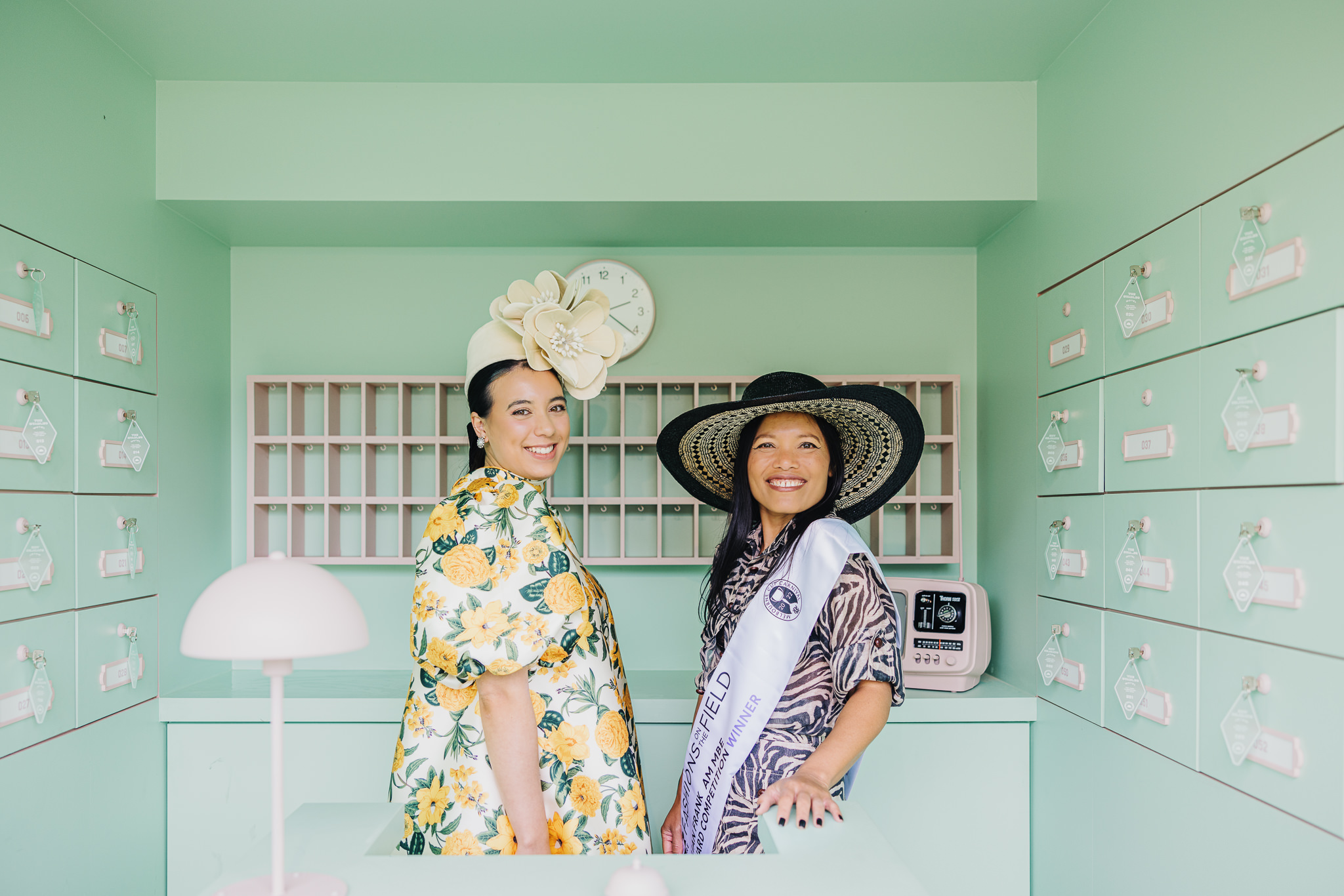 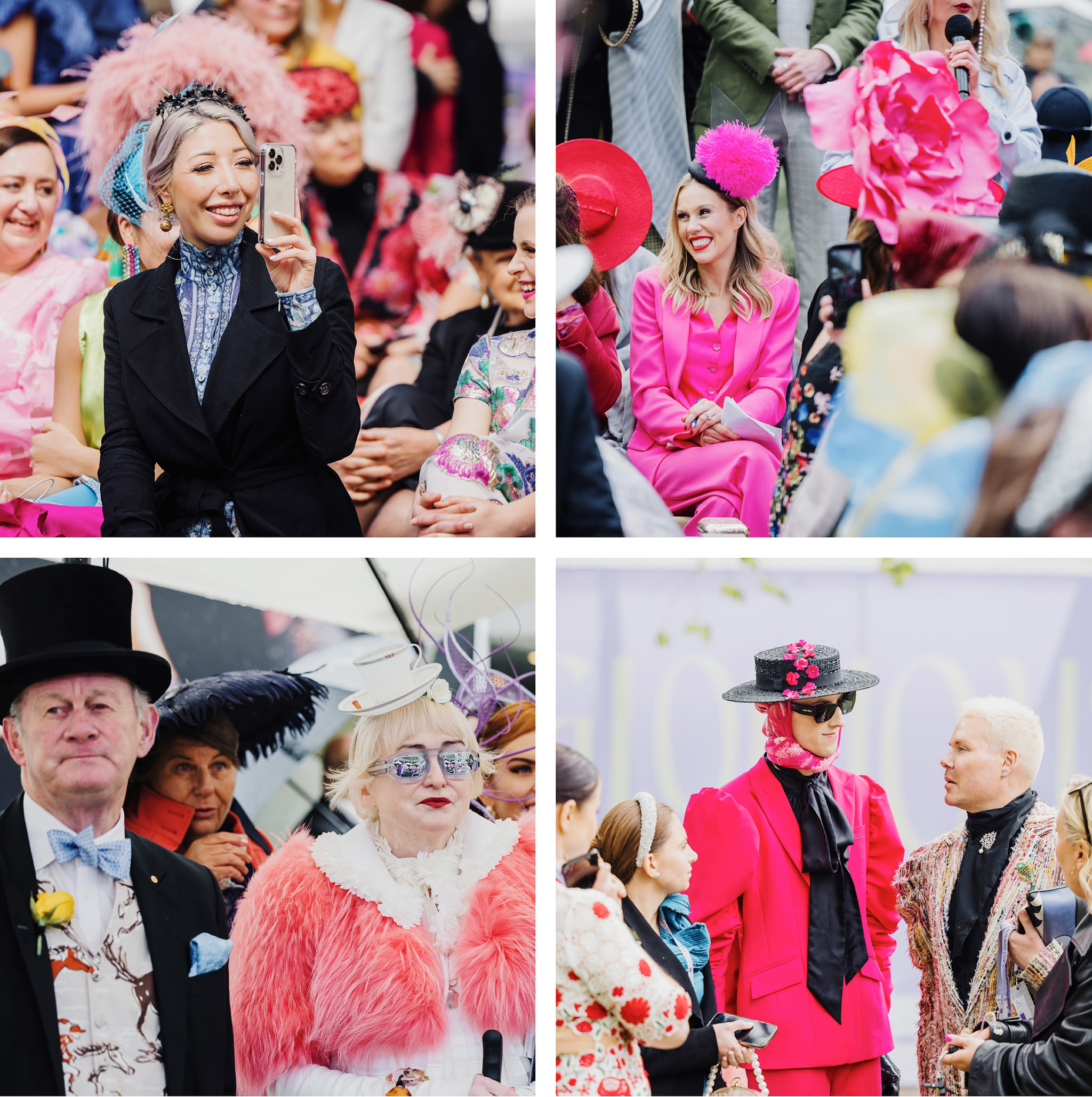 For those who don’t know, I’m the milliner who won the Lillian Frank AM MBE Millinery Award! My gender-neutral design ‘Flow’ was a surprise hit with so many, including the judges who awarded it first place! It was such a thrill to be sashed by the great milliner, Stephen Jones! I don’t know if any other Melbourne Cup Carnival will be able to top this one!

Congratulations to all the winners and to those who put so much time and effort into their fashion and millinery entries. We wouldn’t have much to photograph without all your beautiful designs there. 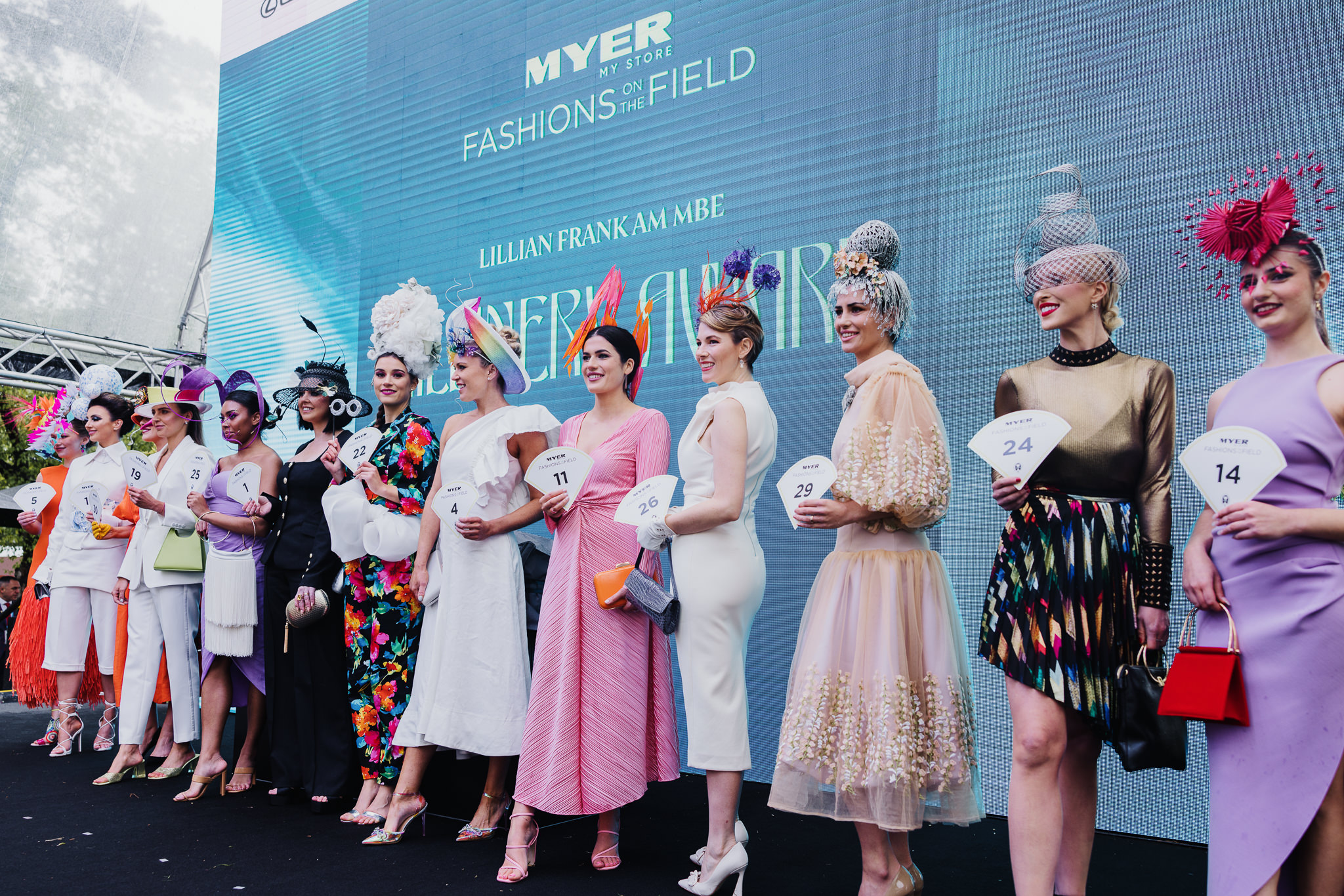 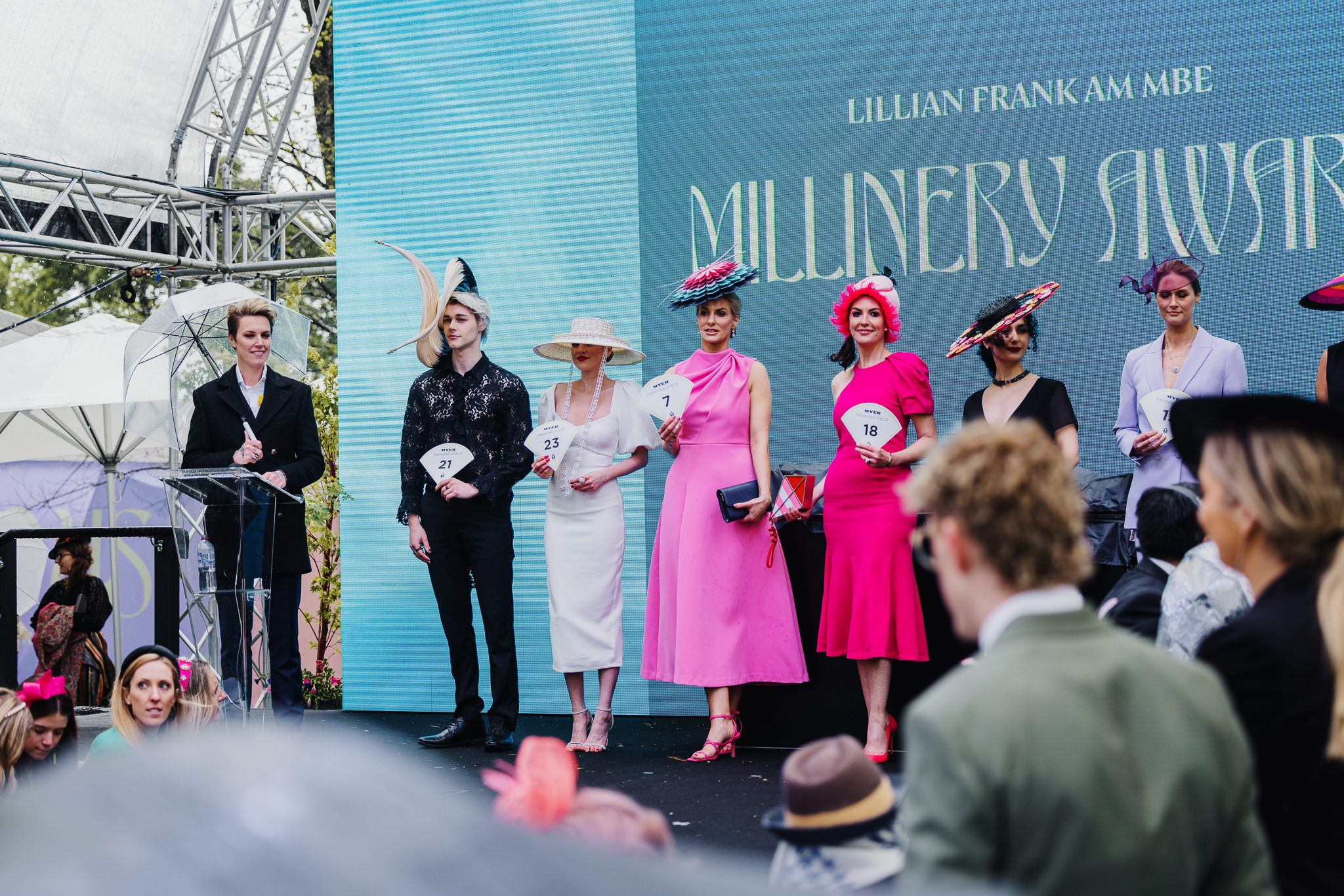 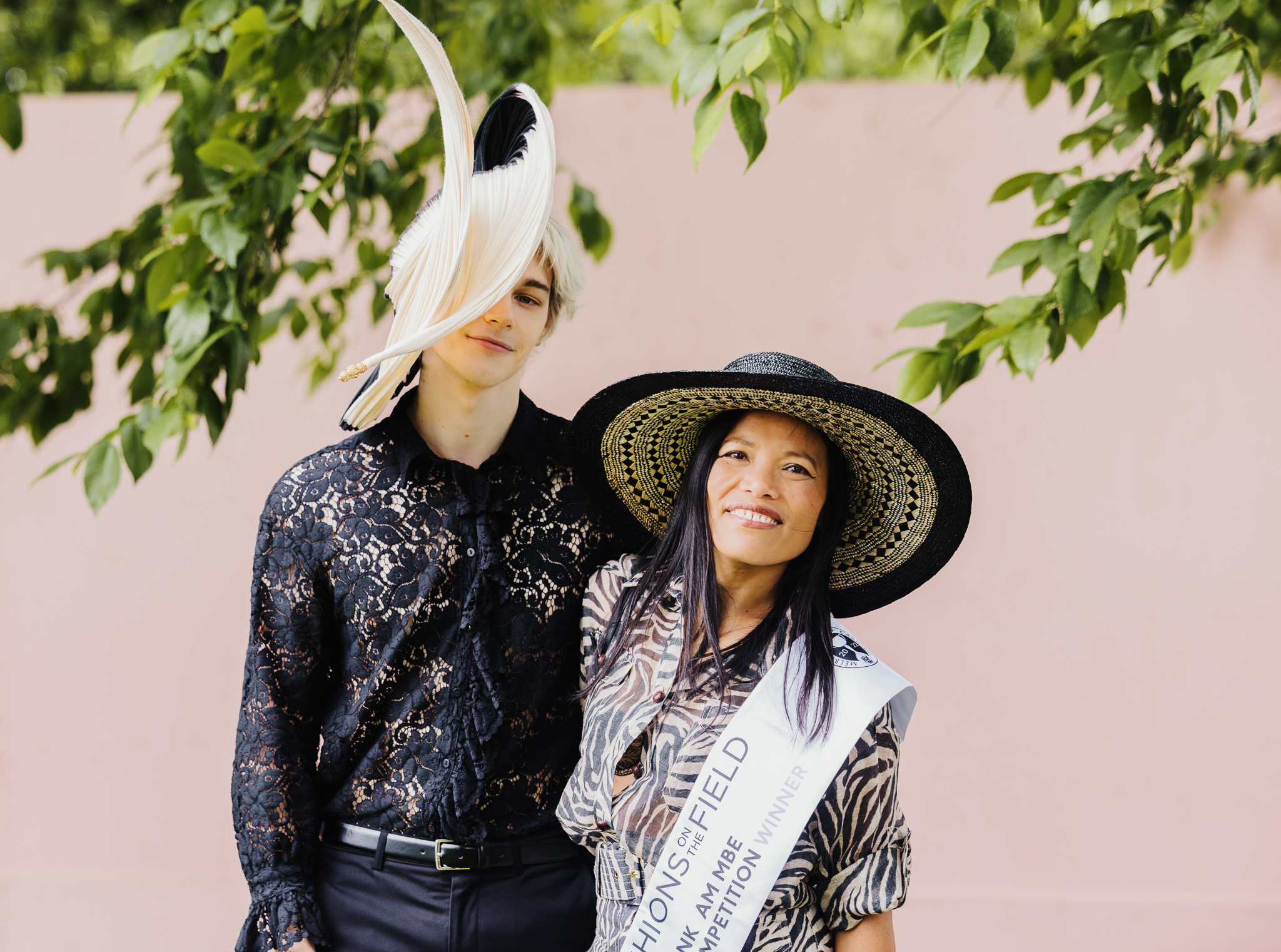 See you next year at the Melbourne Cup 2023

So that’s a wrap for this year! We’re not heading out to enjoy the last race day as we have to work! It’s been such an amazing experience to be back on the racecourse after these years away. Let’s hope that Flemington VRC continues to run these fashion competitions many years into the future. The Melbourne Cup Carnival wouldn’t be so colourful and fun without it.

Enjoy our photo coverage. All photos copyright by Freshphotography.

Have a look at more photos of the fun in the Park @Flemington 2022 here. 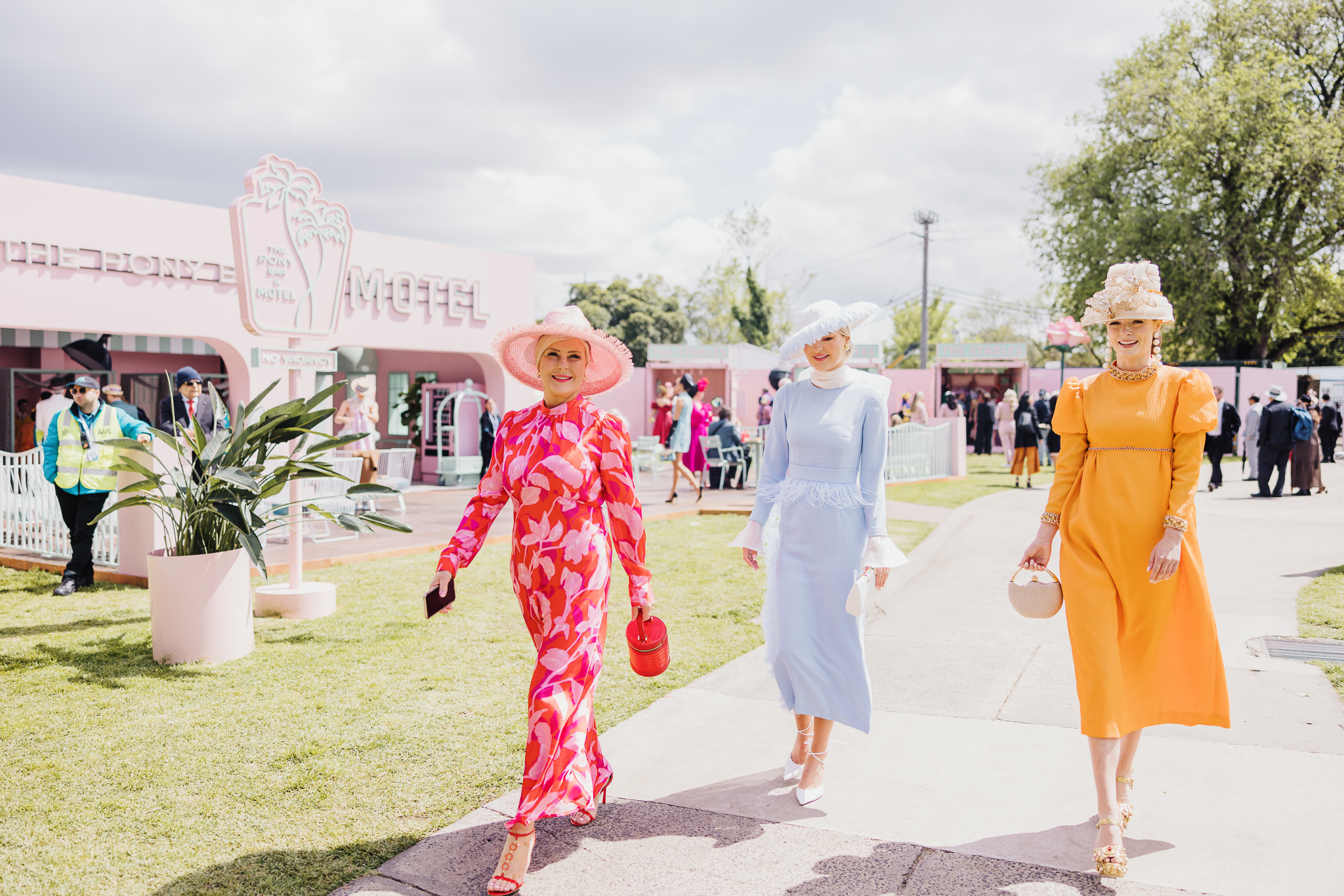 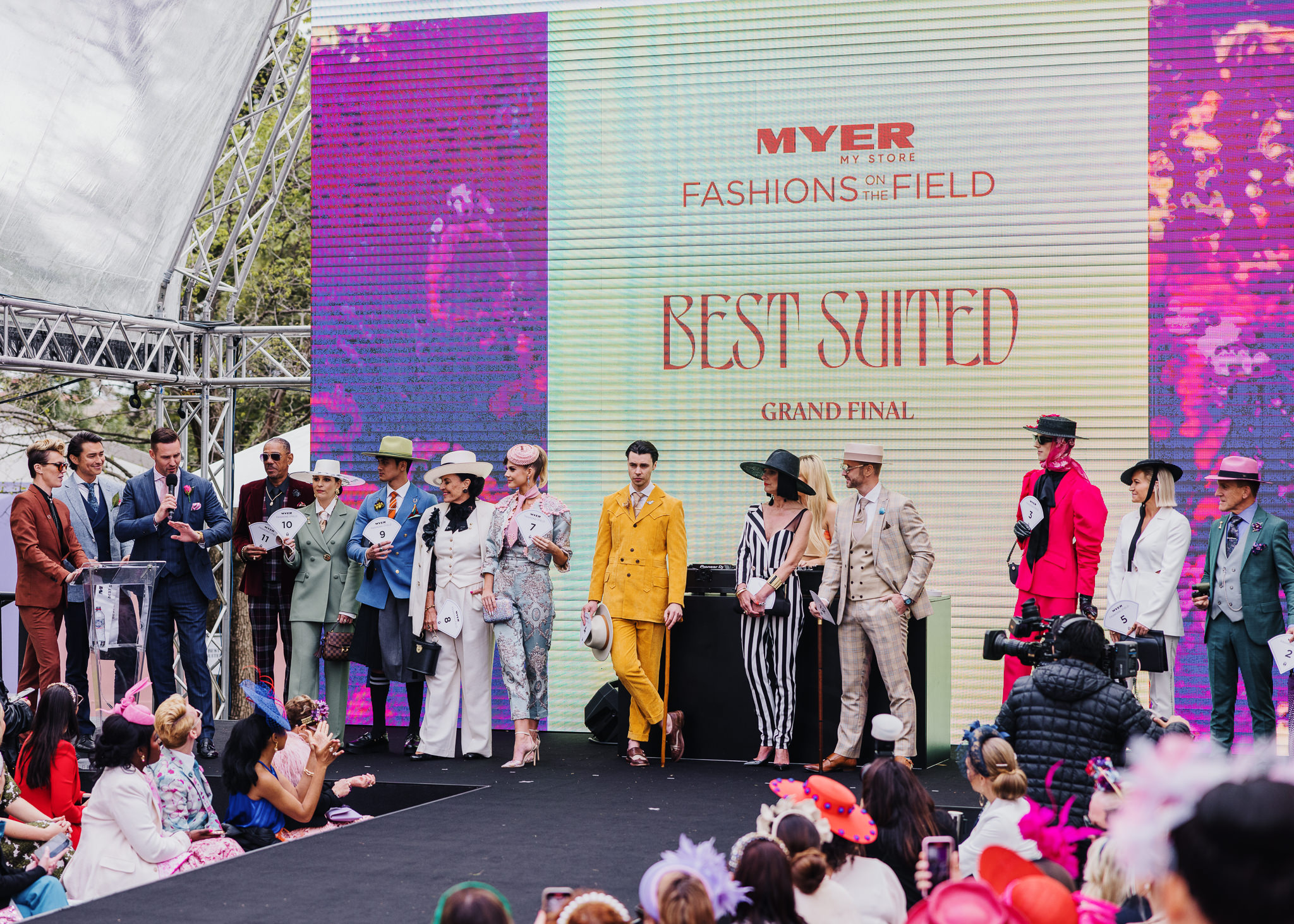