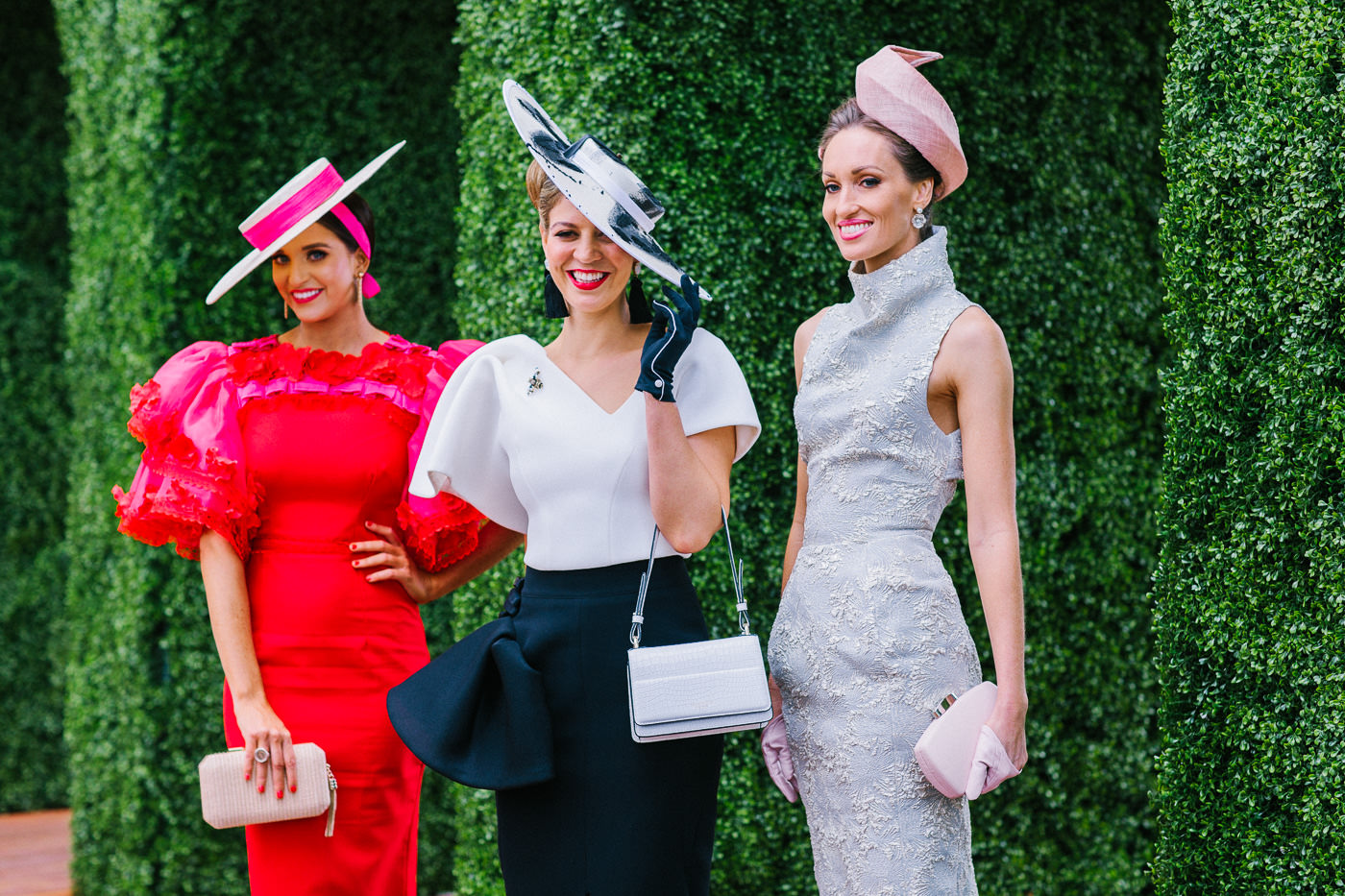 Another Melbourne Cup Carnival has been and gone and we’re now left with sifting through thousands on photos. There were so many fabulous outfits, which made it hard for us to choose who to photograph! Sometimes, it was just a matter of someone being at the right place at the right time. We grabbed those who were nearby and ready to pose. What were the trends 2018? What fashion trends at the Melbourne Cup Carnival will we see in 2019?

Derby Day was kind and allowed fashionistas to shine in their monochrome best. It’s really a hard task to throw together a black and white outfit and make it stand out, but there were a lot of stylish women out on the catwalk who managed to do just that. Kelli O’Dell shone the brightest and won the Myer FOTF competition that day. She wore a current Maticevski ensemble, topped with a Stephanie Spencer boater and finished with what looked like Christian Louboutin heels. That outfit was everything! It was classic, modern and showed individual style. It was so impeccably put together! Kelli went on to win the Victorian title of FOTF for the Melbourne Cup Carnival and runner up in the National final.

It’s rather amazing how well Derby Day attendees adhere to the black and white dress code. There have been occasions where someone wanted to stand out in the crowd by coming along in a colourful outfit. Apart from bright coloured lipstick, there was not a bit of coloured clothing to be seen around the fashion precinct. While black and white is always classic, it can look outdated. Each year, it’s fabulous to see how fashionistas put their own spin on monochrome to impress the fashion judges. Cup Day is always an explosion of colour. This year’s favourite colour turned out to be red and pink combined! So many fashionistas chose this bright colour combo, including the winner of the FOTF on Melbourne Cup Day – Jordan Beard. One Emerald green dress with puff sleeves, by Camilla and Marc, stood out and came third in the competition. A beautiful brown outfit, reminiscent of “Pretty Woman” (worn by Yvette Hardy) came runner up on Melbourne Cup Day. Kate Watts of Only One Ashley took out the Emerging Designer Award with her yellow and navy modern dress. Loved how she incorporated a bubble skirt into it. Always loved a bubble skirt!

Oaks Day was a little more toned down compared to Melbourne Cup Day. This is the day where fashionistas bring out their best fashion. There was really so much to look at and the winner was hard to pick. Lindsay Ridings came up on top with a fitted silver midi-length dress and a simple but sculptural headpiece. She was a vision of elegance. This year saw many of Myer’s top designers (Maticevski, Alex Perry, Nicola Finetti, Acler and Roksanda) as popular picks for the FOTF competition. The State winners consisted of two Roksanda dresses (one was worn by Carle Rutledge, who ended up winning the National competition), one Acler outfit and one Maticevski outfit. Alex Perry dresses were a favourite as well but didn’t place anywhere. Last year, only two of the State Finalists wore Myer designers while the rest were all self-designed. Crystal Kimber took home the big prize last year in her grandma’s skirt which was transformed into a dress!

Millinery trends were leaning more towards the larger brimmed variety. There were plenty of boaters, fedoras, Dior styles and the top hats have become popular again. Crowns were definitely the biggest seller in headwear this year, but they don’t make the cut when it came to the FOTF competition. Rebecca Share, who has had a break from millinery, made a grand come-back and won the Millinery competition with her sculptural headpiece. While shorter hemlines were seen galore amongst the general racegoers, the FOTF contestants stuck with modest lengths. You can always be rest assured that classy looks will always win in the Myer FOTF competition. Never in the history of the competition has a contestant in a mini-skirt ever won. Elyse Knowles had one of the shortest hemlines which I saw. She was styled in a very figure-hugging mini dress with one sleeve. Not very appropriate for the races, but she looked hot! The Cost Of FOTF

While some spent an absolute fortune on their race wear, some outfits were self-made and time-costly. One lady who comes to mind is Athena Lin, who spends countless hours working on her unique creations. Her Derby Day outfit took around 400 hours to put together! It’s a pity that they don’t have a section for those who have created their own outfits! That would add some extra fun to the FOTF competition!

So it’s a wrap for another Melbourne Cup Carnival. The only races I saw was on the big screen at The Park Precint and I even forgot to put my one and only bet for the year on! The weather was its usual unpredictable self, pouring down on us on Melbourne Cup Day. That might explain the low number of attendees this year. Regardless, those who went had a lot of fun. It’s a great excuse to dress up and head out to people watch!