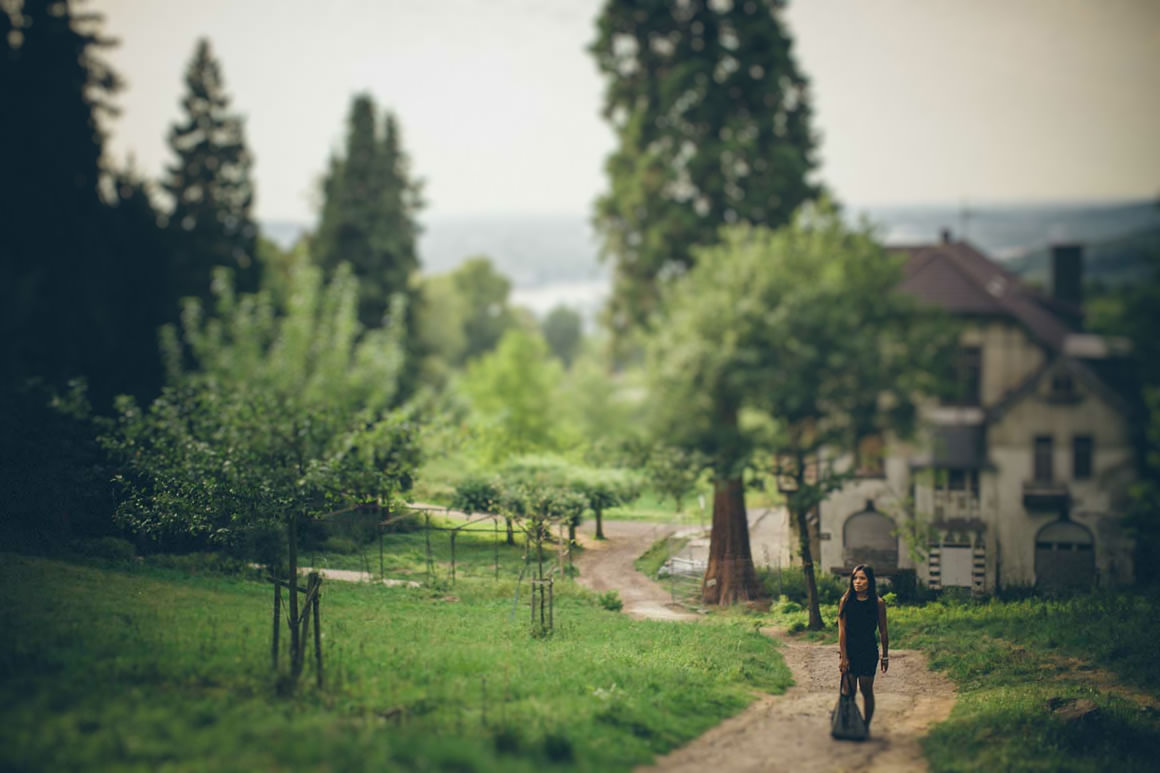 We came across this run down house while we were exploring the grounds around Drachenburg castle during our visit to Germany last year. It’s got lots of character, and probably has a lot of stories hidden within its walls. This house inspired us to do a ‘Haunted House’ themed photo shoot. This is how the story goes…..

Tale of a haunted house

She was dragged along to what could have been a fun-filled event. It was a birthday party in the banquet room of a castle in a small town near Cologne, Germany. Her date was a German fellow that she had met at a beer garden a few days beforehand. He’d been an absolute gentleman, up until now.

She stood there alone, not understanding the conversations that were going on around her and her date was locked in an excited discussion with some other Germans which he was acquainted with. It would seem as though the Witchery minidress with the side zip detailing was not very popular with the conservative ladies, and the men were too afraid of paying any attention in case it rattled their partners! She was sure it was all small-talk not worthy of comprehension anyway.

Slowly she picked up her studded Zara bag off the chair it had been resting on and backed up quietly to exit the room without being noticed. Nobody would miss her if she took a little stroll around the castle grounds to explore it a little. It didn’t take long enough to make her way around the perimeter of the castle so she looked around to see where else she could venture to. Her eyes caught sight of the rooftop of a nearby house. She loved the architecture of the German homes and without hesitation, she strode in her Wittner high heels towards it. Ankle straps make speed in heels more achievable.

As she approached it, the broken windows and wall boards told her that there would be nobody to entertain her here. Curiously she walked around. Quietly it started, the saxophone. It was a gentle tune which sounded vaguely familiar. Was she hearing it being piped through the broken windows of the house? Surely not! The music grew a little louder, sounding like it was being played by a true musician.

What was that tune?

Yes, the music was definitely coming from inside the house! A haunted house is a thing of people’s imagination. This young lady did not believe in silly ghost stories. She made her way to the front steps and started climbing. Not wanting to announce her presence, she removed her shoes and tip-toed toward the top. As she neared the front door, she recognised the tune – it was ‘Songbird’ by Kenny G! No wonder it was so alluring, mesmerising. Her hand was drawn like a magnet to the door handle. Control of her hands did not belong to her anymore. They gently turned the handle and opened the door. Just like that, her body was pulled inside by vine-like arms which wrapped around her waist…………

The party back at the castle had noticed that she had missing and went in search for her. All they found were her shoes on the steps of the run down house and her bag hanging outside below a window. There was no trace of her. [big_text]We left the ending open …. please let us know in the comments how the story ends … can’t wait for your ideas. [/big_text]