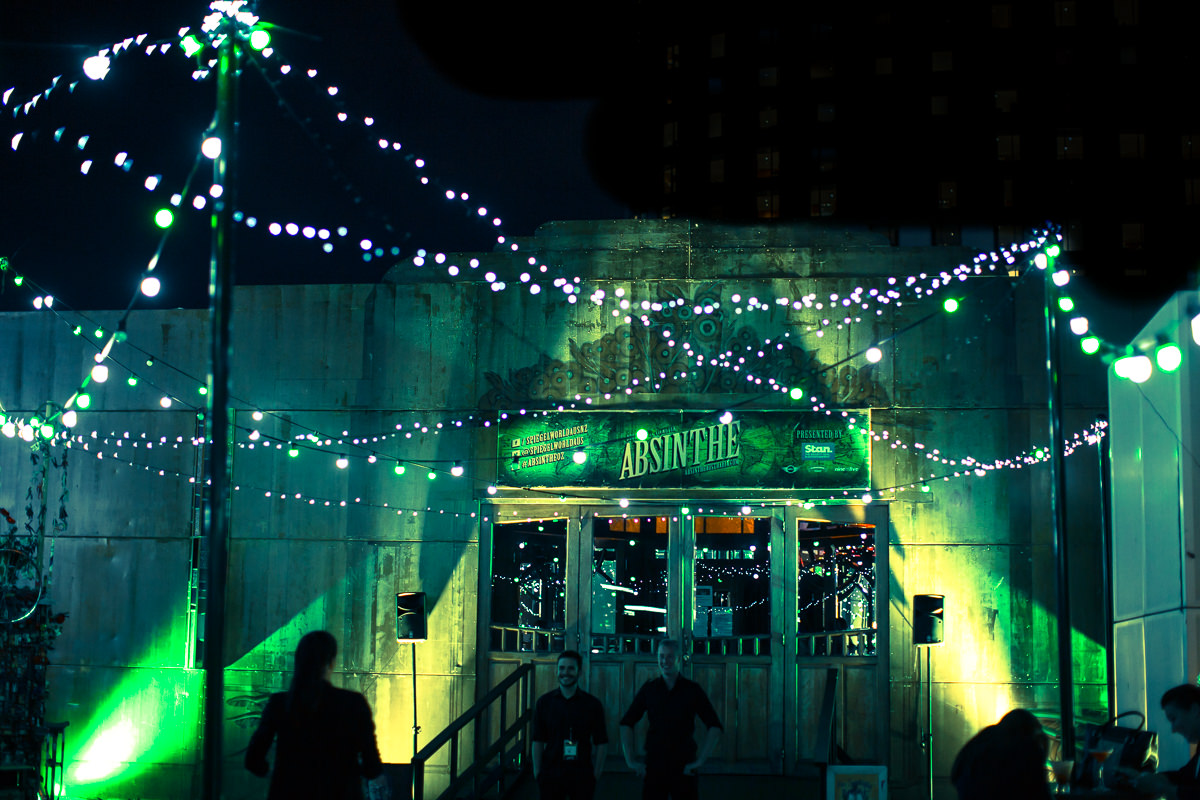 Before heading off to this show, I really had no idea what I was in for. Sure, I knew there’d be some circus acts but it turns out that there was a lot more to this circus than what we were told! It was a nice surprise that my cheeks hurt from laughing so much during the hour and a half of entertainment.

The Crown Rooftop – What a location for the Spiegeltent!

Absinthe is played in the intimate spiegeltent on Crown Hotel’s rooftop. The night was beautifully warm for autumn, allowing us to enjoy a drink while viewing Melbourne’s cityscape by night. Make sure you arrive up to 1 hour early to enjoy a drink on the rooftop … it’s just an amazing view not to be missed. There is a bar inside the spiegeltent if the night is too cold. This show is not for the easily offended! So go and watch it!

Beware! This show is not for the easily offended! Absinthe was played in Las Vegas around 2200 times and the humour oozes thick and strong, leaning heavily towards the indecent side. The show is hosted by the Gazillionaire and his loyal assistant, Penny. Both are quick tongued and had the Spiegeltent shaking with laughter throughout the show. There’s plenty of foul language and Penny gets very carried away with her sock puppets and their sexual antics. According to the Gazillionaire, Melbournians like to think that we’re progressive. I’ll have to admit that I may have contributed to this notion through covering my mouth in disbelief and squealing when the Gazillionaire’s private parts were swinging freely in front of us when he took to stage! There are jokes thrown evenly around at everyone. While no-one left the room in disgust, I have a feeling that a few were sitting uncomfortably through the jokes but staying on to enjoy the fabulous acts.

The show is sexy, including sensual displays of acrobatics to modern music. Shirtless men with ripped physique showed off their strength, agility and precision. There are no nets under these performers to catch any falls and some of them performed quite a distance up! Two lovely young ladies in very skimpy school uniforms sent temperatures up a few notches with their risqué acrobatic duet – watch the little video to get an idea: A slice of Las Vegas in Melbourne

Be warned if you are sitting in the front rows – you are prime targets for Penny and the Gazillionaire’s barrage of jokes! If foul language and nudity don’t phase you, do yourself a favour and head for the Spiegeltent to witness some amazing talent and mesmerising acts. The view of the show is good from wherever you are seated in this antique, 700-capacity tent.

More info: http://www.absintheaustralia.com – The show has just been extended to the 17th May in Melbourne and will then head to Brisbane, Perth and Sydney  … be quick …