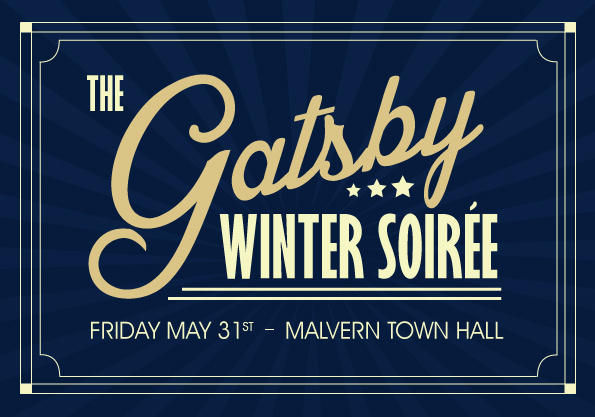 Update: Are you looking for pictures from this event … have a look here: http://on.fb.me/1462Sh7 (facebook like required) and here Gatsby Preview

SSo who’s looking forward to the release of the remake of the Great Gatsby? With this new version by Australian director, Baz Lurhmann, the beauty and glamour of the roaring twenties is revived. Did you know that the movie, The Great Gatsby, has already been made four times? The first version was a silent movie released in 1926 by Herbert Brenon. The most famous one was by Francis Ford Coppola and starred Robert Redford and Mia Farrow released in 1974. The latest version stars Leonardo DiCaprio, Carey Mulligan and Tobey Maguire and is due for release here in Australia on the 30th of May 2013. For those who have not seen it yet, go and do so! I’ve never read the novel itself by F Scott Fitzgerald. Apparently it’s a slender book. Amazing how it has been turned into a sweeping epic of a film!

The story is about a young man, Nick Carraway, who moves to New York to learn about the bond business in summer of 1922. He rents a house in Long Island, an area populated by people who have recently acquired wealth and are prone to throwing it around frivolously. The guy who lives next door is Jay Gatsby. He lives in a huge Gothic mansion and throws extravagant parties every Saturday. To cut a long story short, it turns out that Gatsby was in love with Nick’s married cousin, Daisy. He’s been in love with her for a very long time and throws the parties in order to try and lure her back to him. I won’t ruin the whole story for you! A Tiffanys Event in New York

Tiffany & Co. recently held a star studded event, the Blue Book Ball, at the Rockerfeller Centre in New York to celebrate their Ziegfeld Collection, which was a collaboration with Warner Bros and Bazmark films for the Great Gatsby. The stars of the movie were present of course, along with the likes of Kate Hudson, Sarah Jessica Parker, Gwyneth Paltrow For those who couldn’t be part of that event, we are being treated to a Melbourne event where we too can enjoy a night of  glitz and glamour and all that jazz! The Gatsby Winter Soirée at the Malvern Town Hall

Astor Productions is holding ‘The Gatsby Winter Soiree’ at the Malvern Town Hall in Melbourne on Friday the 31st of May, to celebrate the Australian release of the movie.

I’ve been a fan of jazz and the fashion style of the 20’s for a very long time, so when I stumbled across the Gatsby Winter Soiree event, I just had to be part of it! Fabulous Femme will be there to capture all the fun and frivolity of the night. We’re looking forward to sharing it here with you. There will be jazz music from The Horns of Leroy brass band, Shirazz and The Cairo Club Orchestra all playing classic jazz music of the 20s and 30s. We’ll also be treated to a display of swing dancing from the fabulous team at Swing Patrol in Melbourne. We saw these guys in action at Federation Square during the White Night festival and they were good! See the pictures below: There will also be market stalls, a display of vintage cars, a vintage photo booth. The best part is that you get to dress up and dance the night away! I’ve already got the perfect flapper dress for it! Get some friends together and book your tickets for what is going to be on Fabulous night. Maybe you’ll catch our eye and end up on our pages here. We’re excited to capture both ladies and gents in their fine jazz-age gear  : )

I hope to see you at the Malvern Town Hall in Melbourne.